The Suits of St James’s 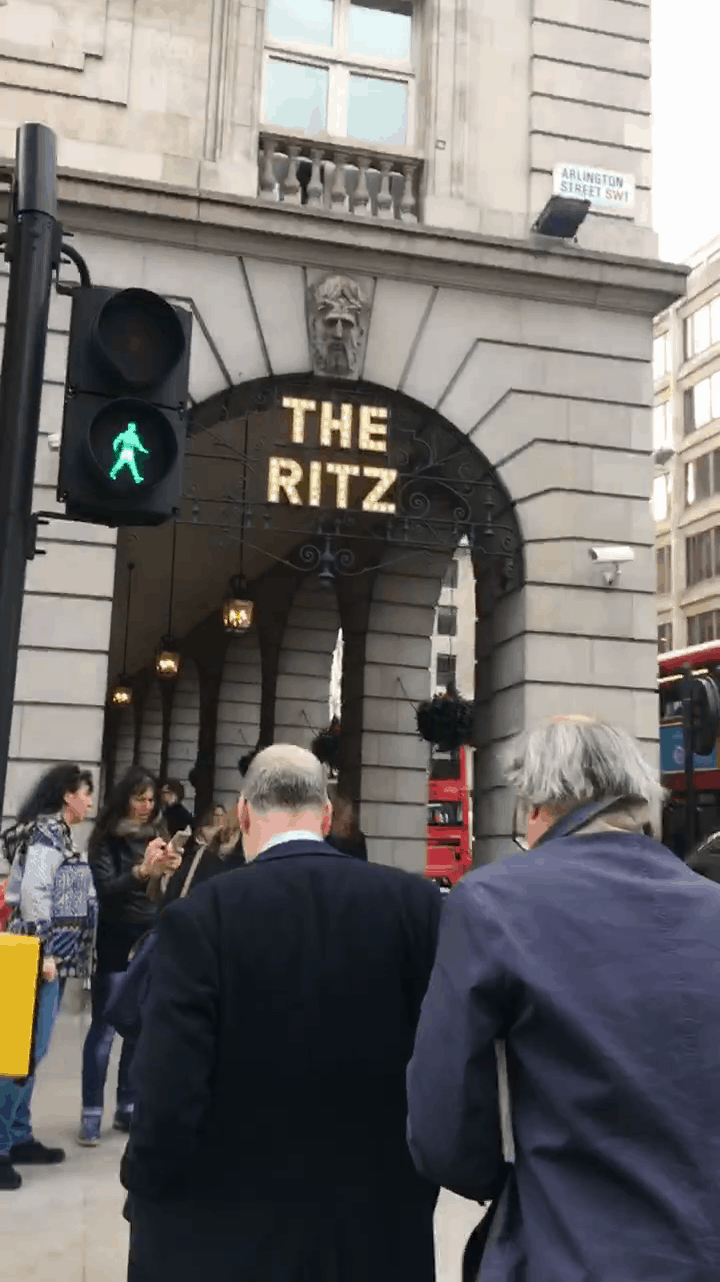 In the middle of London, within a smattering of buildings which slink between Mayfair and St
James’s where the hush-hush rich like to prowl and sit in cafes and smoke their cigars away from
the prying eyes of Piccadilly, there lies a little alleyway. It’s one of those nameless, in-between
places – a sort of limbo connecting the two very real places of Mason’s Yard and Ormond Yard
where you can occasionally catch Mr. Stephen Fry jostling with a handful of eau de nil shopping
bags from Her Majesty’s favourite, Fortnum and Mason. To those who know, this cramped little
street with its never-ending walls is affectionately named ‘crack alley’ after its most frequent and
revered visitors.

When the crack’eads come on a Tuesday afternoon to pick up their goodies they’re usually quite
friendly, smiling and laughing, their dogs ripping apart various bits of street plastic they’d been
given as a distraction from people’s legs. The women usually say hello in that way that women
sometimes do to make their macho counterparts seem less scary, softening them and humanising
them. Sometimes they fuck, sometimes they shit, sometimes they sleep but mostly they just chill.
Then they pick up that little baggy and they’re gone. Until the next time.

There’s one guy who seems a little separate from the rest. He’s always by himself, a lone wolf. A
very handsome wolf with the kind of movie star looks you’d expect in a 19th century period drama; a Sgt. Troy or a Mr Wickham – the dashing but devilish wolf in sheep’s clothing who’d charm a heroine out of her meek fortune only to gamble it away. He sometimes sleeps in the little stoop of dealer in Master Paintings & Drawings Jean-Luc Baroni’s unassuming shopfront and rises early to change into a nice, crisp, clean shirt straight out of the plastic. To the entertainment of any onlooker, he’ll forget to take out the sliver of cardboard which keeps the collar straight leaving it to curl out the side in a cartoonish wisp.

Once he’s satisfied with his schoolboy appearance, he grabs his five large canvases to lay them
out in a line against the concrete wall of the oblong-shaped White Cube, a blip amongst the ancient brick buildings of the old Mason’s Yard. The paintings themselves are reminiscent of Basquiat in a clumsy kind of way – as though he’d seen the exhibition at the Barbican and thought: I could do that! So really they’re not much like Basquiat at all, just messy, unfortunate lines of thick paint forming strange unintelligible scenes. Some of the pieces are double-sided (value for money?) so he’ll jitter about, turning them round every so often if he isn’t pleased with the effect.

In the 1960s the yard was known as the rock ’n’ roll destination due to the infamous Scotch of St
James, so named because of a tartan interior. Playing hideaway to many an A-list celeb over its 53
year existence, it was here that James Marshall Hendrix supposedly played his first gig in the UK
under the alias Jimi. At the Paul McCartney-bankrolled Indica Books (now Guy Peppiat Fine Art)
the star-crossed lovers John and Yoko met at one of her early shows. The shop-slash-gallery also
played home to the counterculture ‘bible’, International Times.

In the 1660s the Yard was used to keep rich men’s horses and those that tended to them out of the view of their wealthy masters. The surrounding fields were beginning to be siphoned off to lords etc. to build their lovely palatial homes. St James’s Palace had but a decade and a bit earlier seen its King Charles I, the son of another ‘Scotch’ James VI and I, say goodbye to his children and
escorted to Whitehall where his head was sliced from his shoulders.

James VI and I was not really a fan of women and was obsessed with snatching from them any
potential power they could wring from the cloth of their less-than-fortunate situation. In 1597 he
famously published his compendium on witchcraft Daemonologie, asserting a belief in such
practises and spreading his utter crap across both Scotland and England. But it was in a letter to
John Chamberlain written in 1620 that truly shows his supreme idiocy:

The Bishop of London had express commandment from the kind to will [the clergy] to inveigh
vehemently against the insolence of our women, and their wearing of broad-brimmed hats,
pointed doublets, their hair cut short or shorn, and some of them [with] stilettos or poniards…the
truth is the world is very much out of order.

The year 1660 saw the reinstating of the fun and flirty King Charles II – sweet relief after years of
civil war. Five years later the new King announced his renouncement of French dress in favour of
the ‘Persian Vest’. It is as we know it today the grandfather of the three-piece suit.

Piccadilly has always been a bit of a fashion mecca for men although they’d have a hard time
admitting it for fashion is a feminine word and a fine suit is but an essential in any man’s wardrobe. A man named Roger Baker made his fortune making a men’s collar named a picadill in this area of London and in 1743 his influence was of such significance that it was named as we know it today. And as the 18th century whirled into the 19th it was within these streets that George ‘Beau’ Brummell made his name as the serious descendent of the fop, the first English dandy. It wasn’t an outlandish or novel style that made Brummell so seductive but his performance of quotidian perfection married with an outstanding verbal wit. He was mean and he was arrogant and he broke up with a poor woman simply because she ate cabbage. But the nastiness was sexy.

His friend and biographer Captain Jesse describes him: “Hessians and pantaloons, or topboots
and buckskins, with a blue coat, and a light or buff-coloured waistcoat”; typical for the day, only it
was on “the best figure in England”. But, like most modern menswear, the devil is in the details;
those stirrups to keep his thin doeskin breeches taught across his legs and an admirable loyalty to
the military tradition of abstaining from wearing underwear. Slivers of Brummell’s lifestyle live on inthese streets with the tailors and the gentlemen’s barbers, punctured by a Charles Tyrwhitt or TM Lewin whose names are more polyester blend than Beau’s preferred woollen Bath coating. His
statuesque appearance is now immortalised by Irena Sedlecká at the entrance to the Piccadilly
Arcade, although one does wonder where that infamous bulging cock has gone.

In 1666 there appeared a little pub on the corner of the Yard called the Mason’s Arms. Now where
it lies, the Chequers Tavern is perhaps the oldest remaining original feature of the Yard. On a good
day the men come in their creased-at-the-knees Charles Tyrwhitt or TM Lewin suits and drink beer and talk about whatever men in plastic-blend suits with a beer talk about – money and business and such. They’re just there at 11am, drinking. Don’t they have jobs? Maybe it is their job. Sometimes, usually in the evening, there will be a woman with them in her uniform black skirt and stiletto pumps. But it’s almost always men.

When the suits walk past the crack’eads with their little Itsu or Pret paper bags they’re always a bit
scared. Perhaps they can see themselves in them, or the potential fate of mankind without the
cushion of wealth. Close friends, all smiling in a hazy plastic high. But isn’t that what he’s doing as
well? At the pub, with his glass and his fag and his suited buddies.

“You must trust me to come down here”, a low but noticeably whiny voice reverberates up the walls of crack alley as dusk sets. A silvery giggle follows, “people live here”.

People tend to compare men in tuxedos to penguins. These men, in their ill-fitting business suits
are more like the pigeon. Strutting around, slick, slug-slimed hair, or none at all, their chests puffed out in defiance – defiance of what? Poverty? They enlarge themselves in order to mate, crooning at the women with both their voice and their eyes. Do you remember feeding the birds in the park when all the big boy pigeons would chase after the sleek little girl? I used to shout ‘rape, rape!’ and chase after. She always seemed like she was trying to get away.

The man in the suit is staring at the beautiful blonde woman, legs for miles as they say. Like he
can’t actually peel away his eyes. Gross. I walk in between them obscuring the view. Tsk, he
moves round behind her. She’s oblivious. Or maybe she’s just used to it. Men love to stare. But
when they catch the eye of a woman sitting on the hard tarmac, hands stretched out in a silent
plea, they snatch away their gaze. The morning of Hogarth’s Four Times of Day comes to mind;
the lady on her way to Church dressed in all her fine clothing looks past the beggar woman at her
feet, any empathy far removed by the closeness of their geography.

The Community Support Officer has asked the woman with her hands stretched out to leave. Only
her, strangely enough. Her in the hijab. More like to fuck off out of sight of the tourists come to take their selfies outside the Ritz. Fuck. But you know she’s only sitting outside Pret. The very same Pret who boasts a donation of 50p to “the homeless” from each special Christmas sandwich sold. That strange and scary unclean race of people, “the homeless”. I wonder how many lives Pret
have fucked by popping up all over the country, how many little coffee shops have descended into oblivion – how many homes have been upended.

I was a stranger in this city, the gravelled rumble of Louis Armstrong begins to resonate in my ears; I had that feeing of self pity, what to do, what to do. Great timing, lol…The outlook was decidedly blue…She picks up her hooked walking stick and starts shuffling away…A foggy day in London town had me low and had me down…I walk on, just like everyone else.

Now at Green Park station there’s a lady with a big video camera pointed towards two men. Two
men sitting on the ground, beanies on, legs tucked into fresh sleeping bags. She’s gesturing to
them, open the bottle, the bottle of beer. So two men are sitting on the street playing at
homelessness, drinking a beer. Just chilling. Great. And ten metres away a man looks on, no
sleeping bag, a hand scrawled cardboard sign at his feet; I’m hungry. His face contorts.

There’s some graffiti which seems permanently scored into the walls of crack alley – communism
will win, it says. Each time they paint over it, it tends to appear again after just a couple of days. In
early December they covered it for what seems like the last time. It’s naive, hopeful cry no longer
graces the suited pigeon men. They just walk by
-Eilidh Duffy 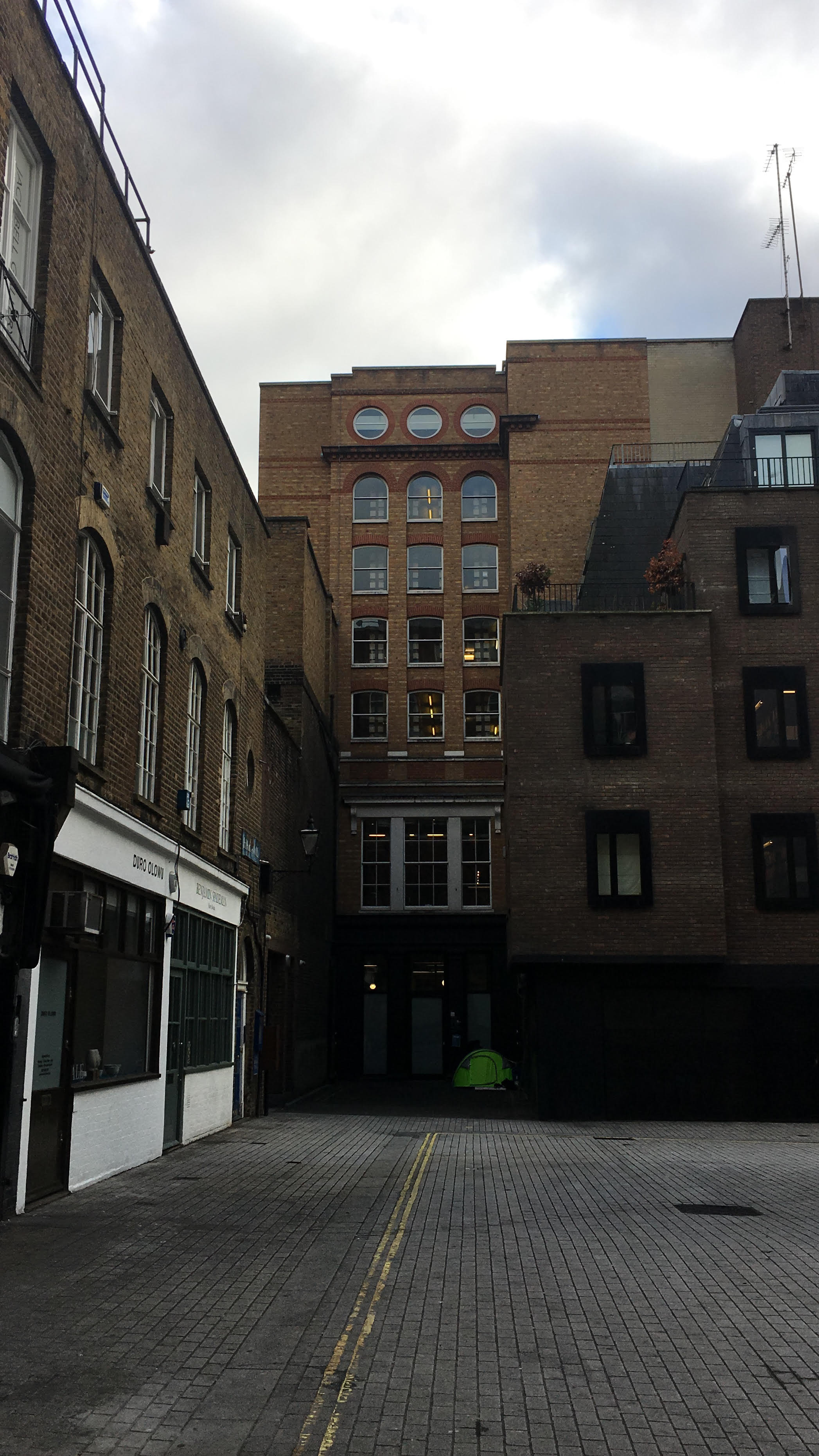