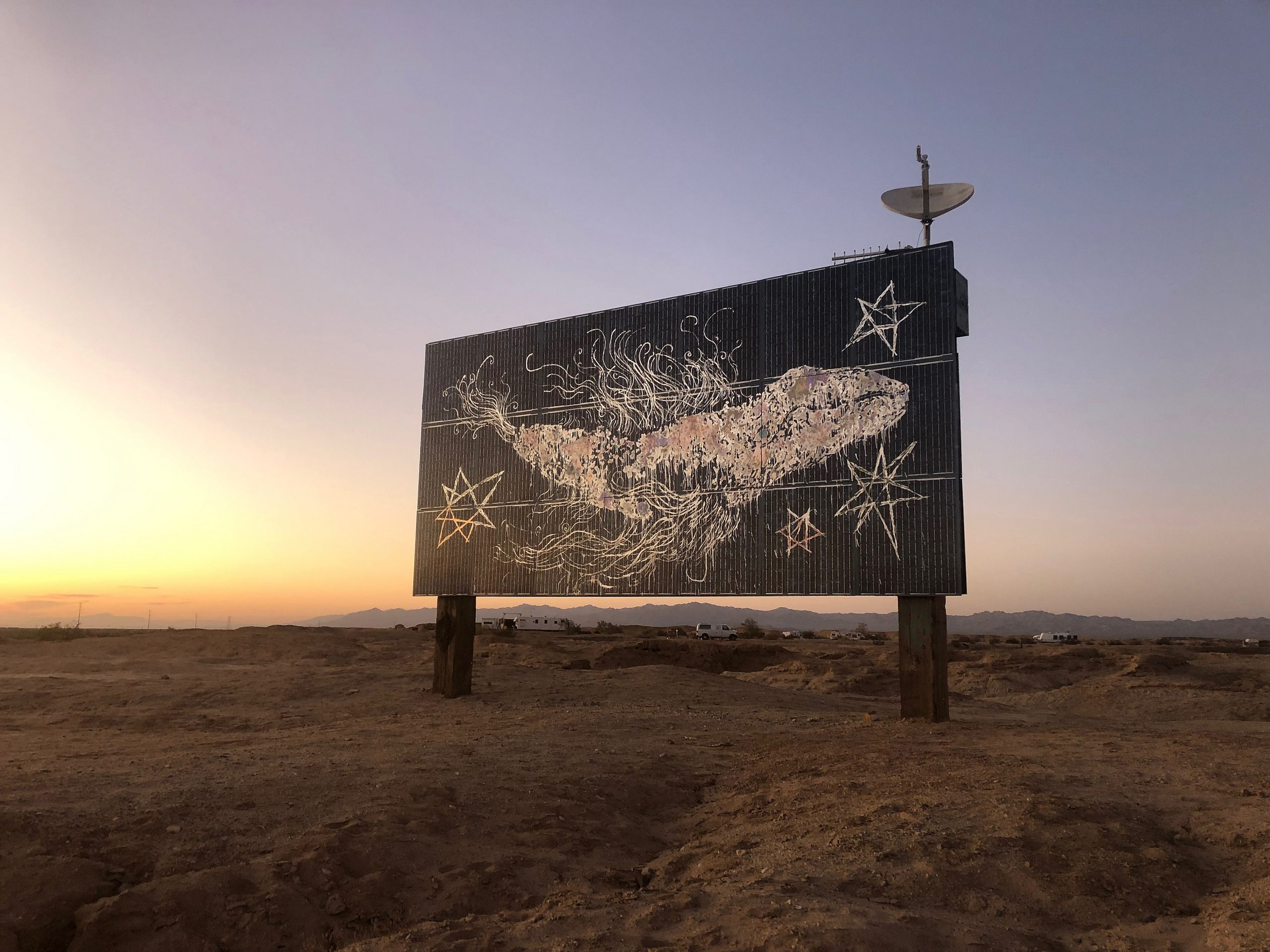 I talk to Jake Cruzen on the phone everyday. Most of the time he is driving from Malibu to a cabin in Crestline, a semi rural mountain community an hour east and an hour straight up from downtown LA. In Malibu he is the au pair and tutor to the children of a visionary blockbuster movie director. In Crestline he lives with his wife, newborn, and enormous puppy in the parts of their house that aren’t under construction. He is the best painter I’ve met. 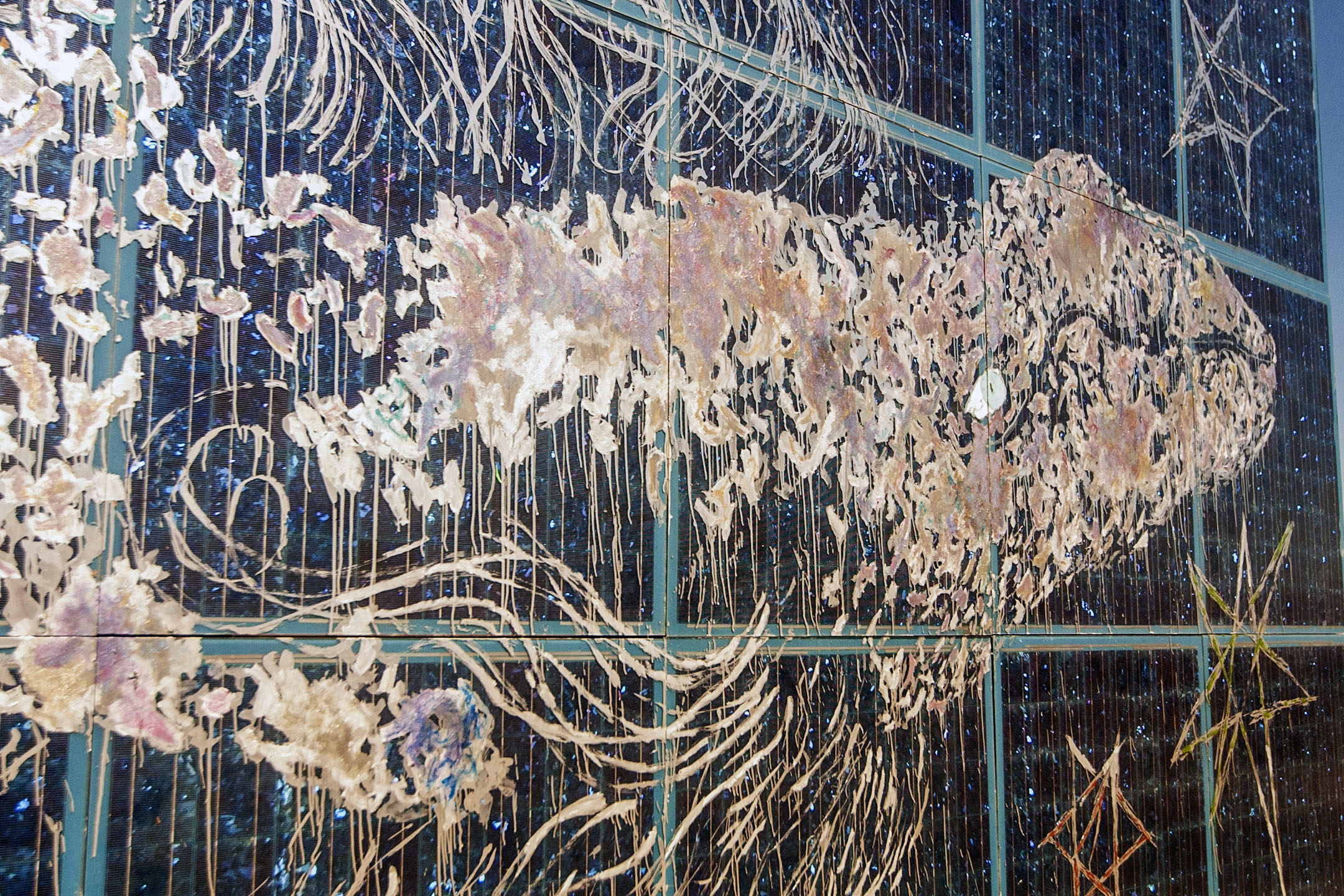 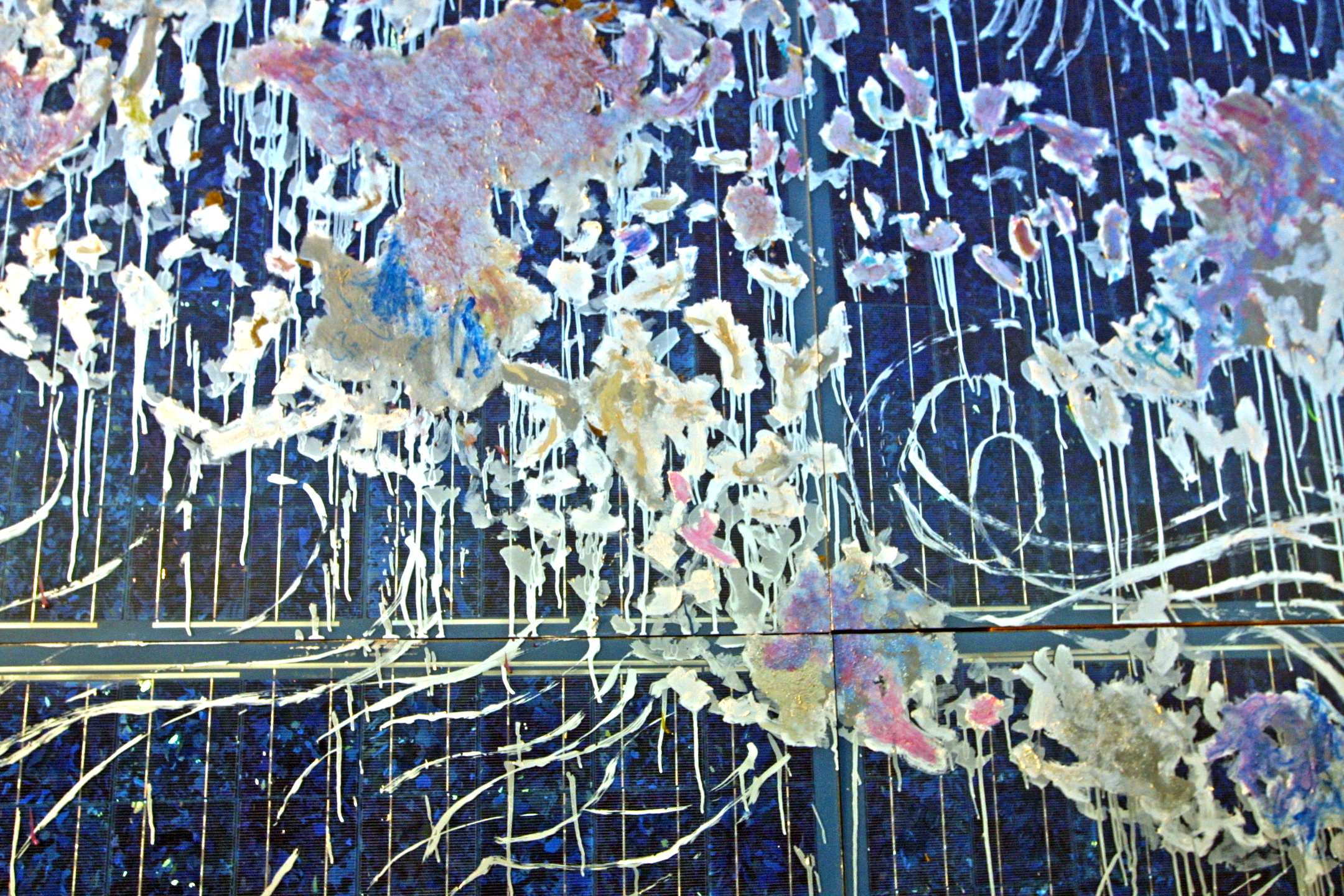 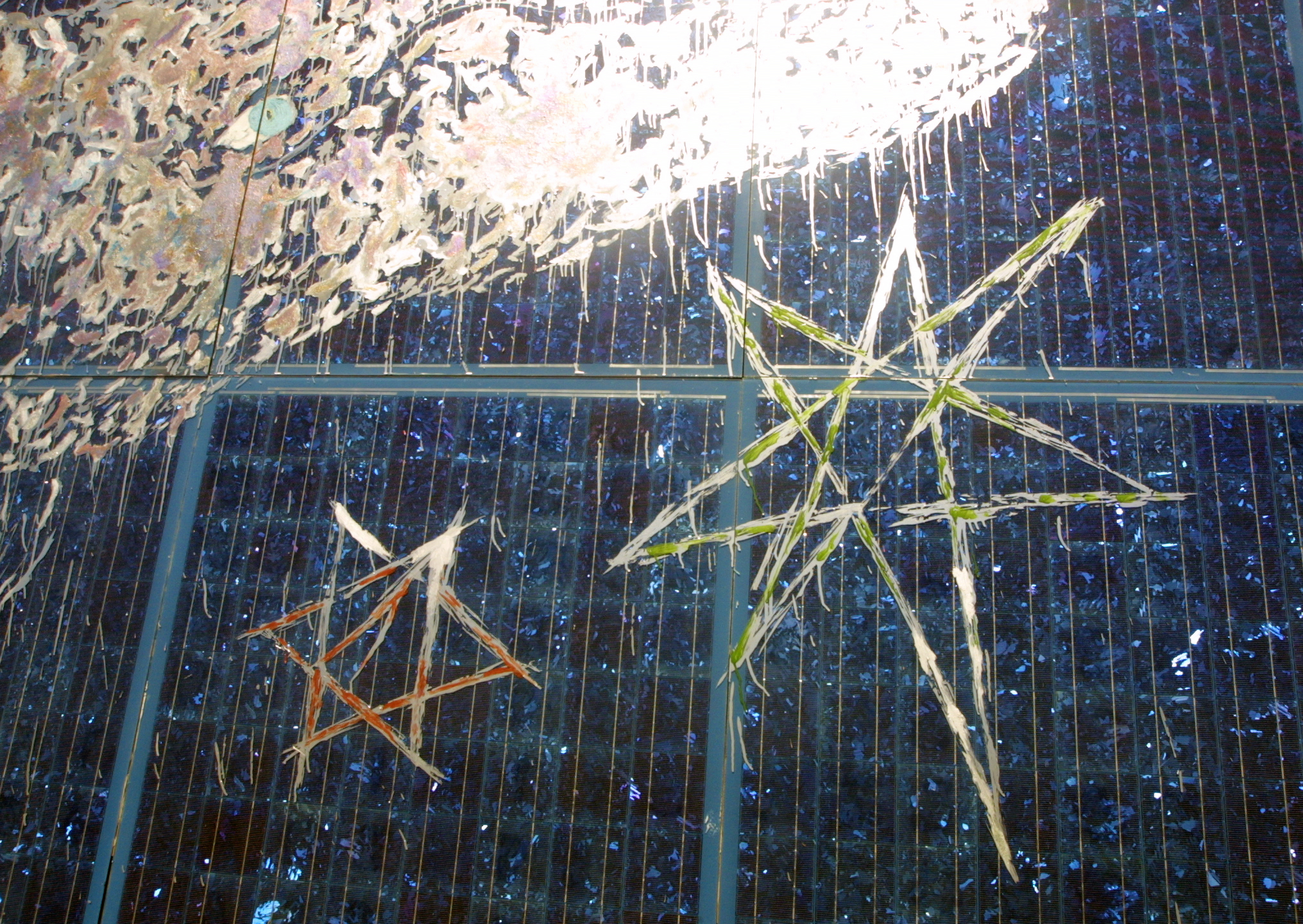 Imagination is honorific. Nothing imagined is rootless but good art, a step further, is a celebration. Fireworks celebrate color, folklore celebrates ancestors, Jean Paul Gaultier celebrates having tattoos. Recently I talk with Jake while he is driving to Slab City, an autonomous community located in the California Badlands. After the five hour drive he works on the life sized portrait of a whale we’ve been calling Wishbather. You probably won’t see Wishbather in person but if you are reading this essay you are going to see pictures of it and I want to tell you what you are looking at. 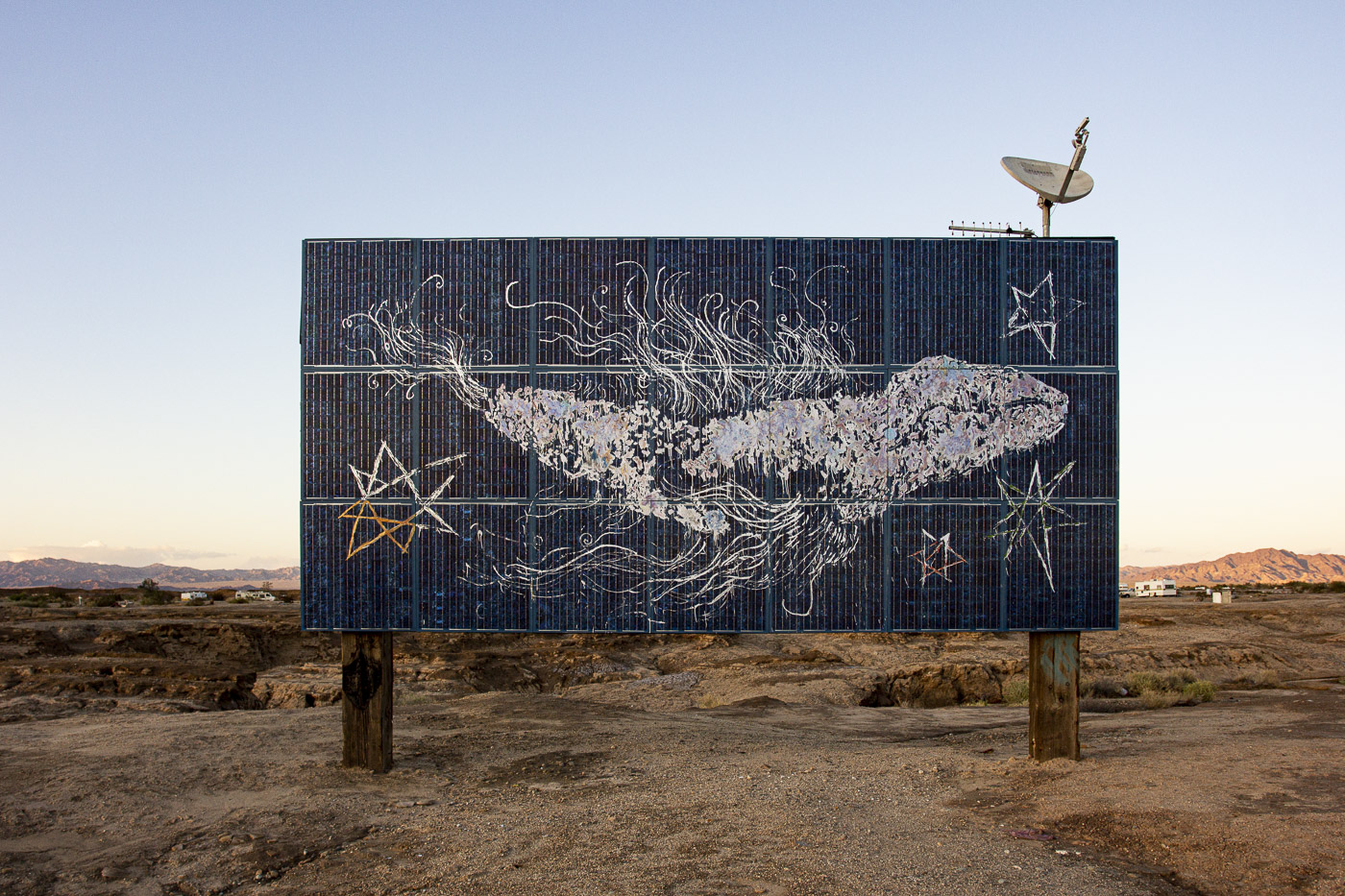 Slab City is a unique confluence of autonomy, desperation and classical California dreaming that has fascinated documentarians, los angeles hipsters and gas station attendants on Route 111 for nearly five decades. In the most straightforward way, it is a place where people live in the desert. This statement becomes more complex once you take into account the material conditions that come with it. In the desert there isn’t the structure of public utilities, prefab housing, a police force, public schools ect ect leaving the people of Slab City responsible for these things themselves. From that situation comes ingenuity, and from that ingenuity a proposition of living that attracts people who would prefer to construct their own community and reality. Salvation Mountain is the premiere attraction of the community. A hill made of adobe and straw by the artist Leonard Knight, covered in brightly painted prayers. The transient and permanent occupants of Slab City adore Salvation Mountain and venerate the late Leonard Knight for his vision. The sculpture is a cornerstone of the identity and mythology of Slab City, it is a testament to the hermetic ideal of creativity, comparable to the Watts Towers or Edward Leedskalnin’s Coral Castel. Cruzen’s Wishbather can be seen as both situated within and responding to this particular tradition of public art. Wishbather like Salvation Mountain is a monument of imagination. 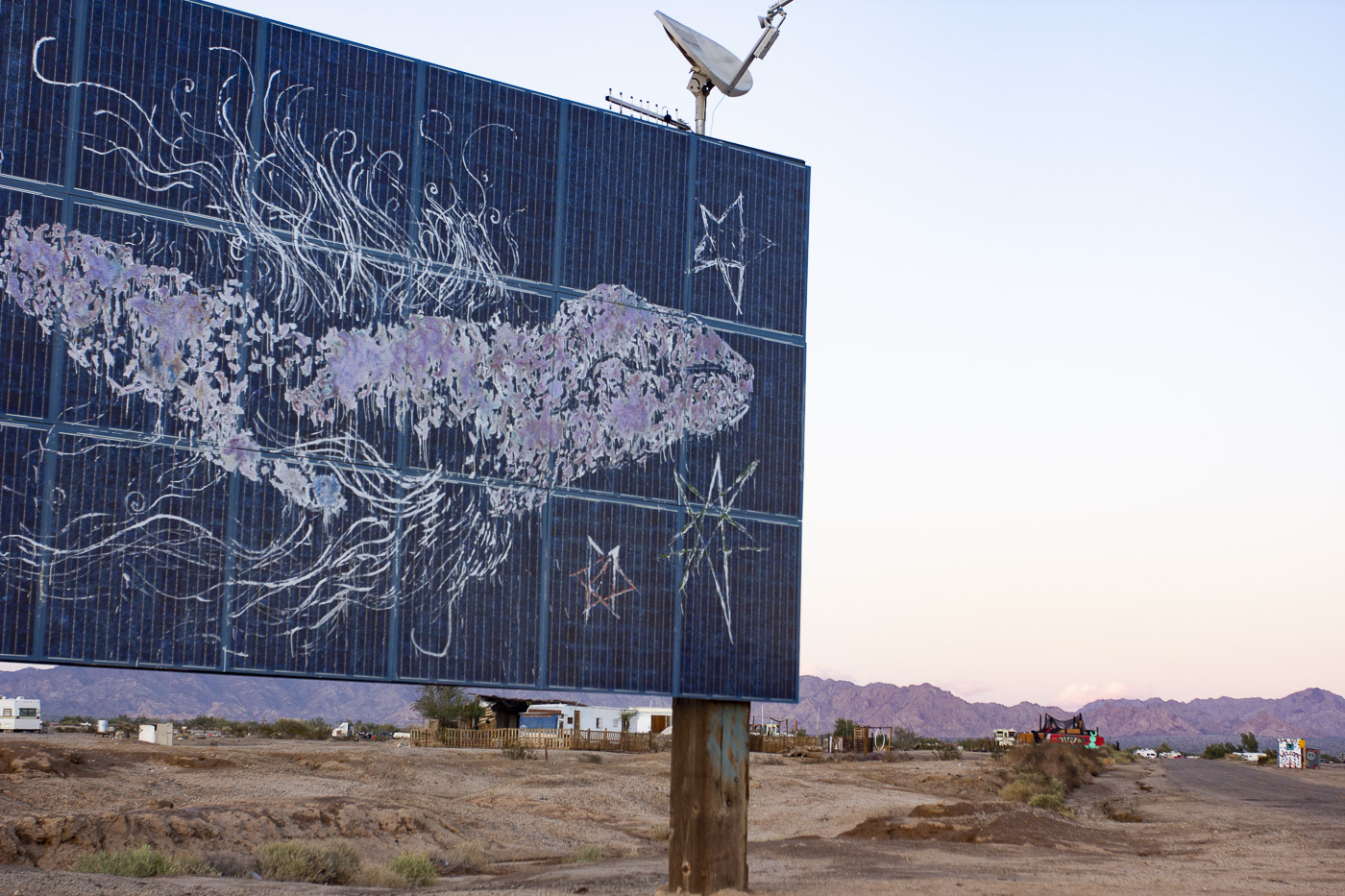 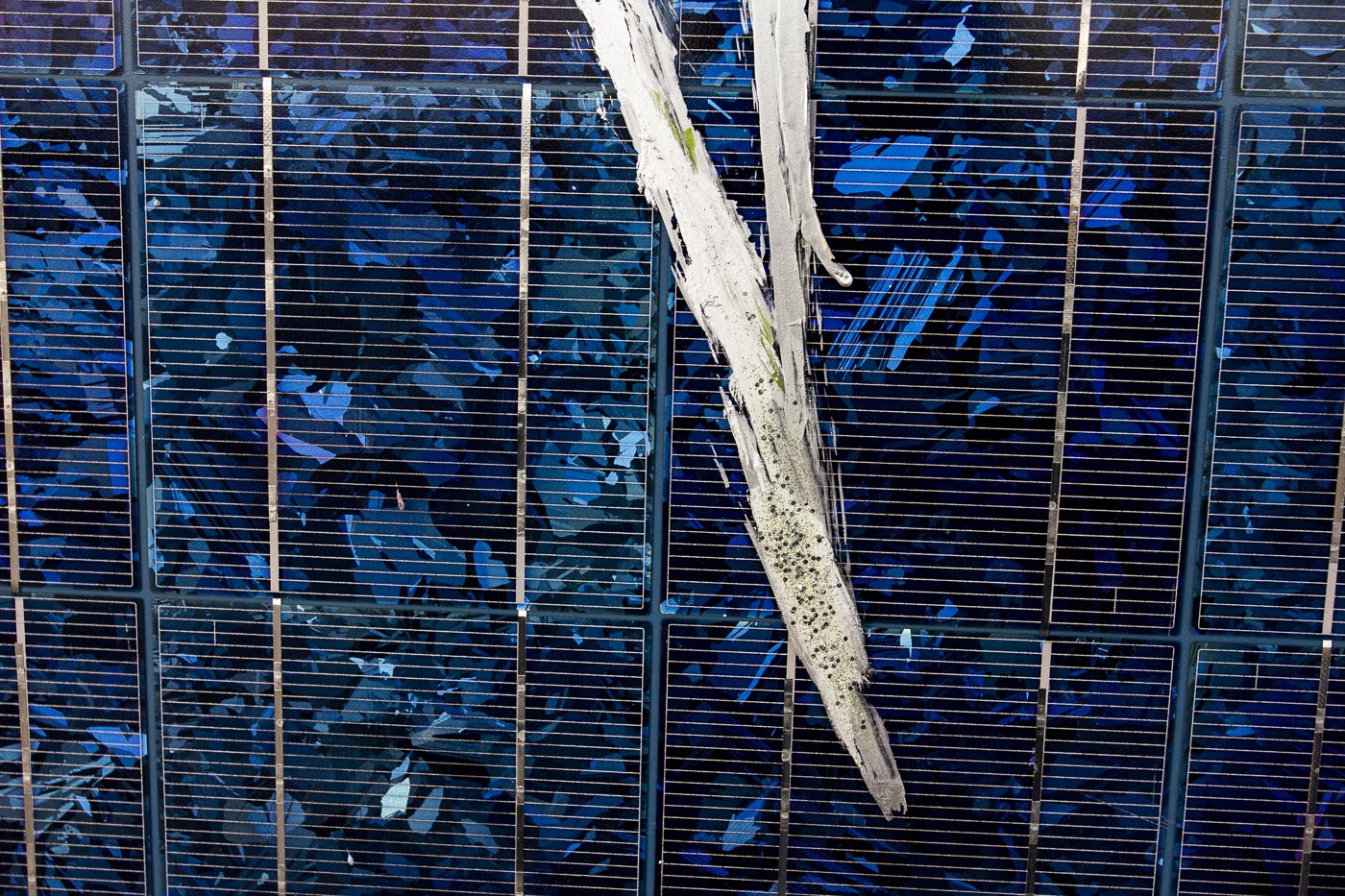 Imagination is horrific. Being genuinely creative is jarring and doesn’t allow for a lot of control. It’s hard to be legible and attractive without control. Some friends like to use the phrase “team ugly”, and I like the way they use it. Team ugly isn’t fake, but it’s also more than real. It’s not about making something okay, it’s aggressive, hurtful and magnetic. She isn’t pretty but she’s hot. Honesty is team ugly, and the problem with being on the other team is it makes you a liar. 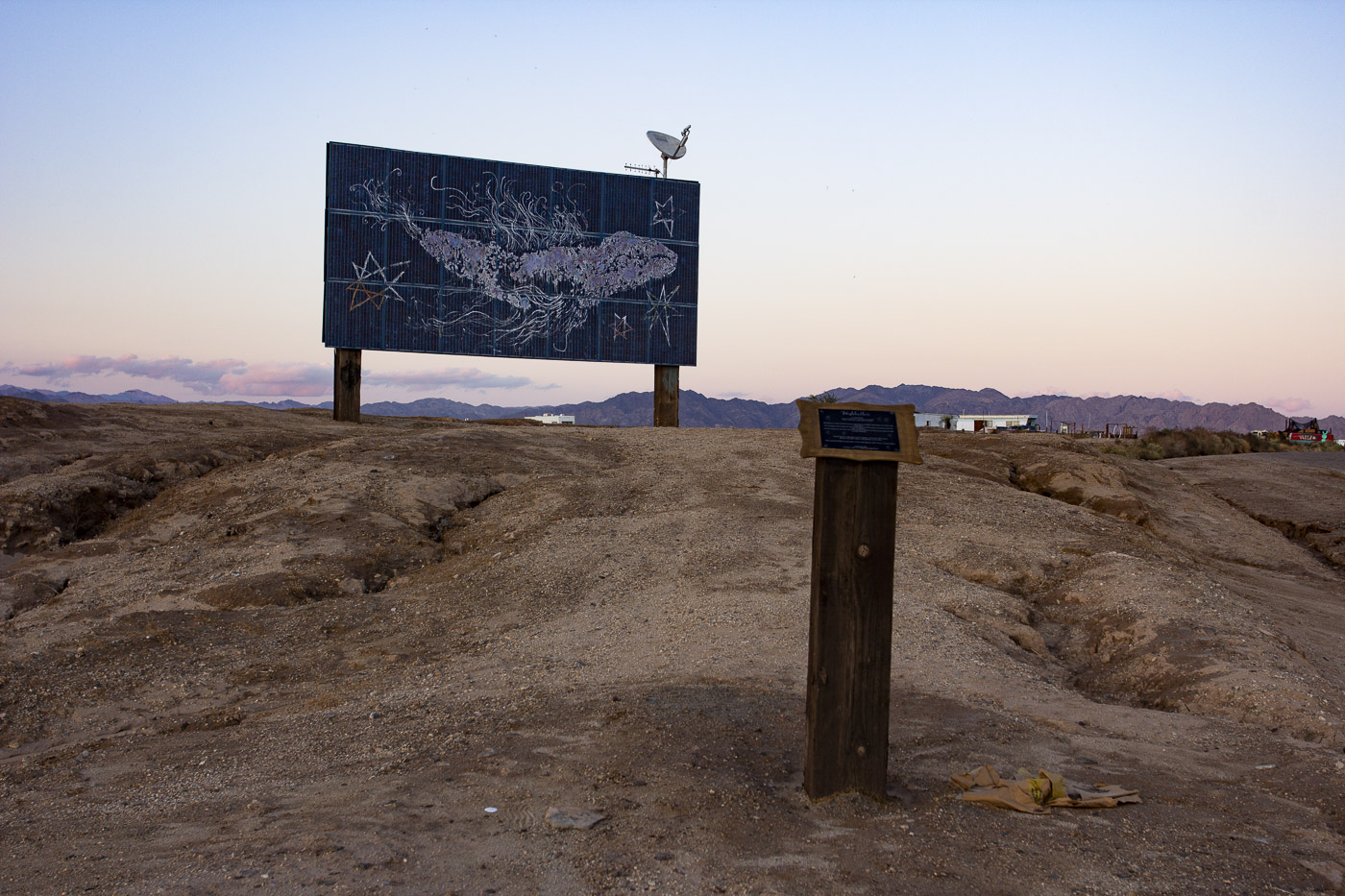 If Jake was a WWE wrestling character he would use his real name and genuinely lose his temper in the ring. The last art dealer I talked to about Jake’s work said that he likes everything he sees but doesn’t get the project, doesn’t see a clear position. The way I want people to see Jake’s work is the way they saw chunky sneakers when Balenciaga first brought them out. Jake’s painting has the rare capacity for honesty as well as imagination. There is a need inside of the present that makes the future happen. By not faking it, Jake is making art that sees the future. Art is good for ideas that need more than sneakers or cinema to be fully expressed and dug into. Mostly these ideas are approached in isolation and with as much control as possible. This is the easiest way to communicate that something serious is going on and the results are well suited to a clean presentation. The problem with this is distance. It’s painful when art ends up being closer to other art than it is to people. Jake’s art practice doesn’t have this distance. It is a devotion to the homemade kind of magic that happens between your bedroom and kitchen. Homemade magic is applying the same sophisticated set of tools to living variables. It’s a dirty and undependable experiment, unstable like an open mouth kiss. Jakes painting is close to you, you start nose to nose up against it. That’s where you start excavating meaning, from your understanding of home, from the beauty you overlook in your own life, from a place that you know well but had not expected to be the entrance to something deeper. 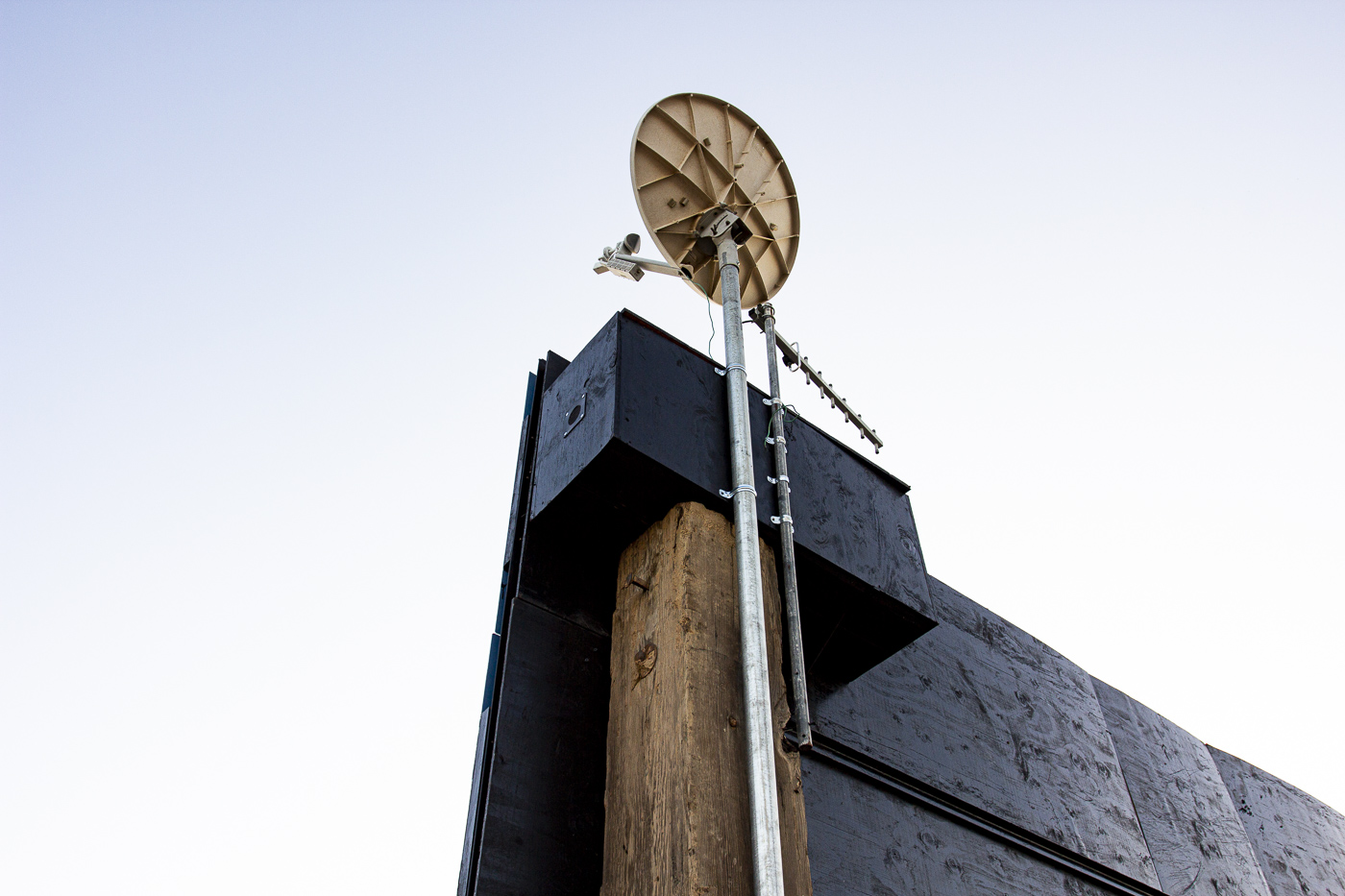 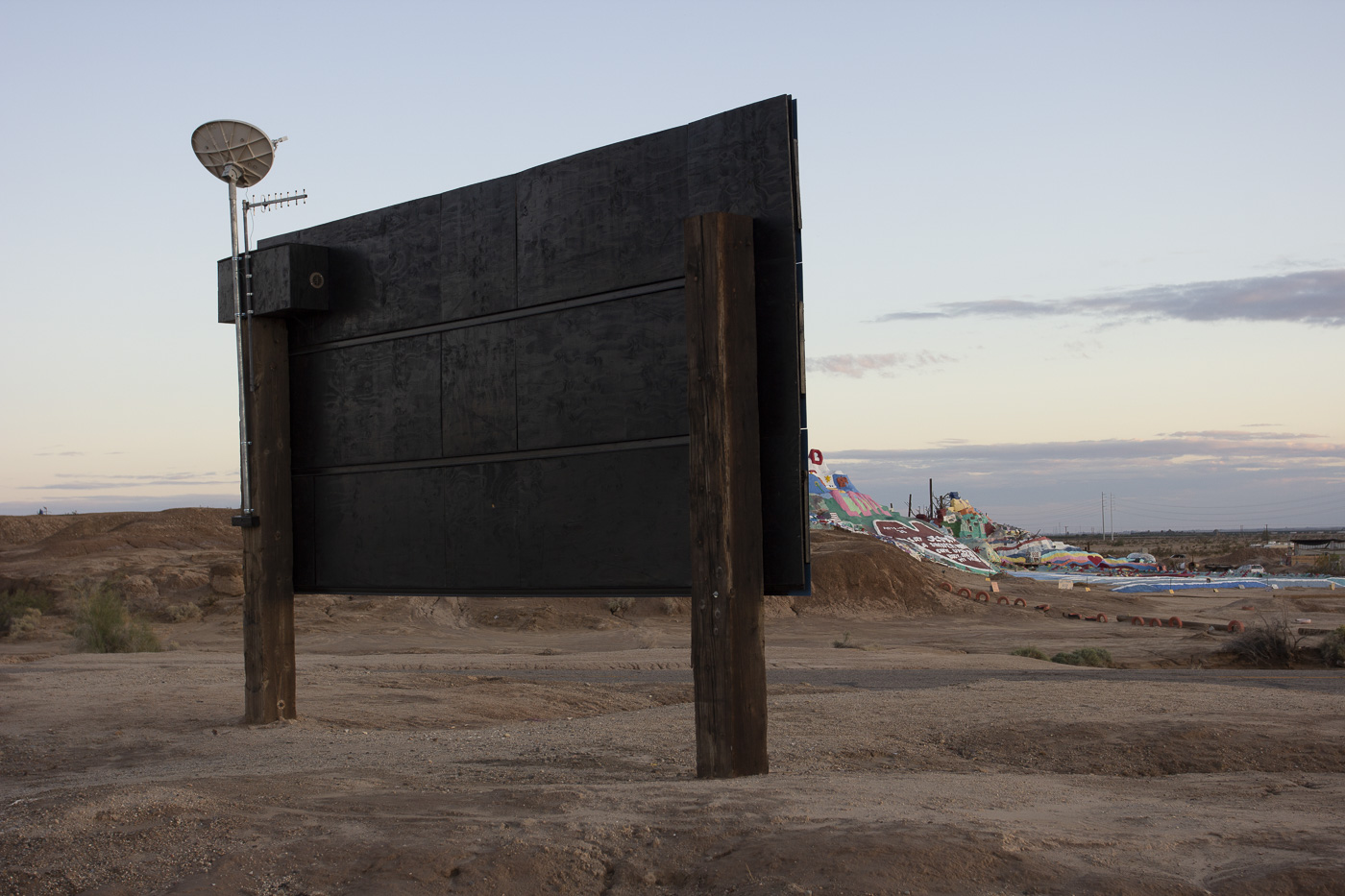 Wishbather, like all true art projects, works like a swimming pool. On the shallow end it can speak to an audience independent of an art historical background. It’s a seductive image and presence. A huge glittering whale standing against stark desert. Golden hour instagrams are very possible. Vice magazine is very possible. If you need to connect to wifi, while you argue about directions back to Los Angeles, it’s there and its stature and seduction can change your afternoon and create a memory. The whale in the dessert your 7th grader might text their crush about from the backseat of your road trip. Wade in a bit and a viewer can start to chew on something contemporary, solar panels, what kind of future does this stranded whale predict for our climate attorfeing habitat? You can see Wishbather now as an activated relic. Crowning the solar panels is a satellite dish transmitter. It sends a distress call of a whale into deep space. 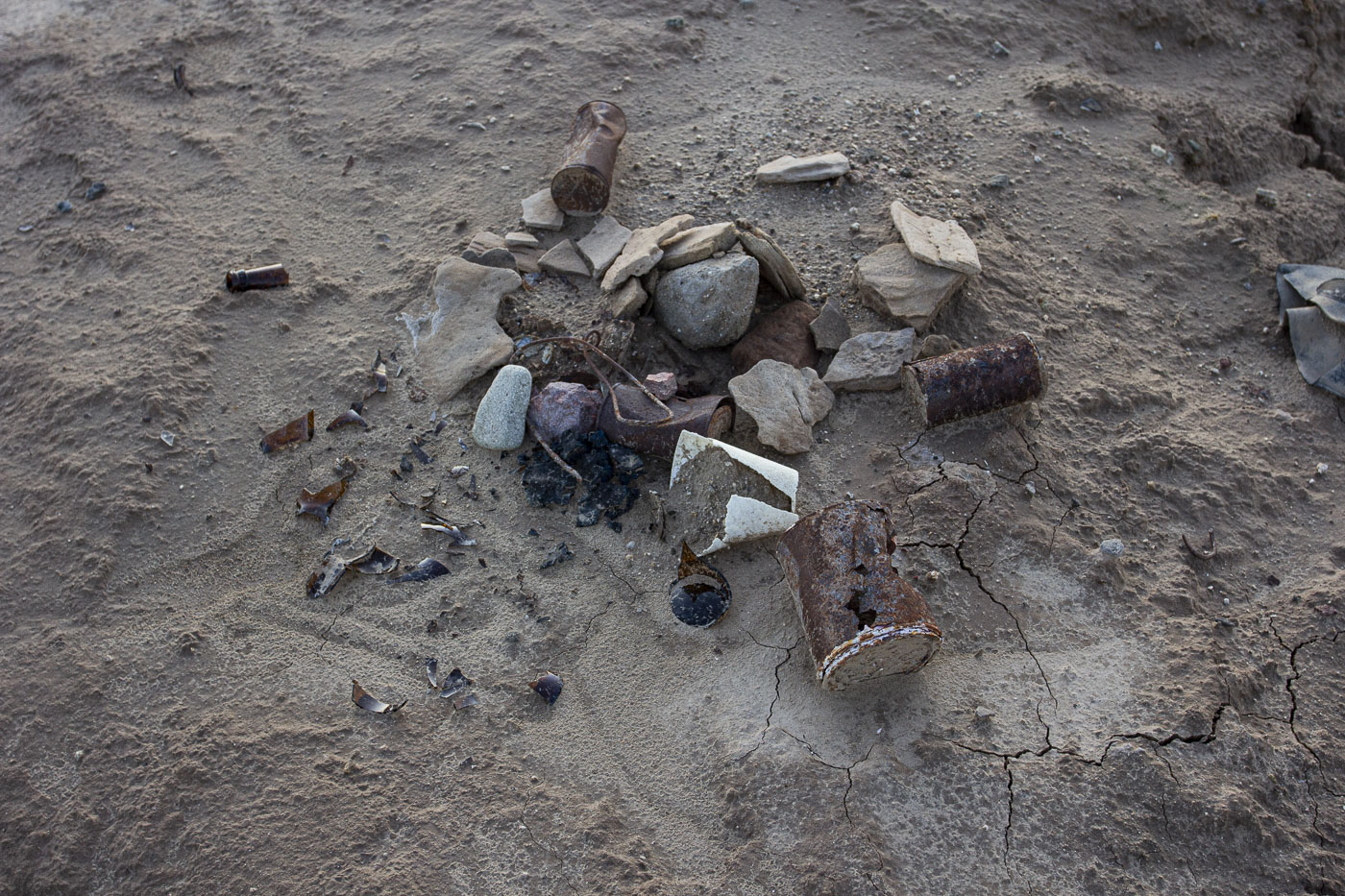 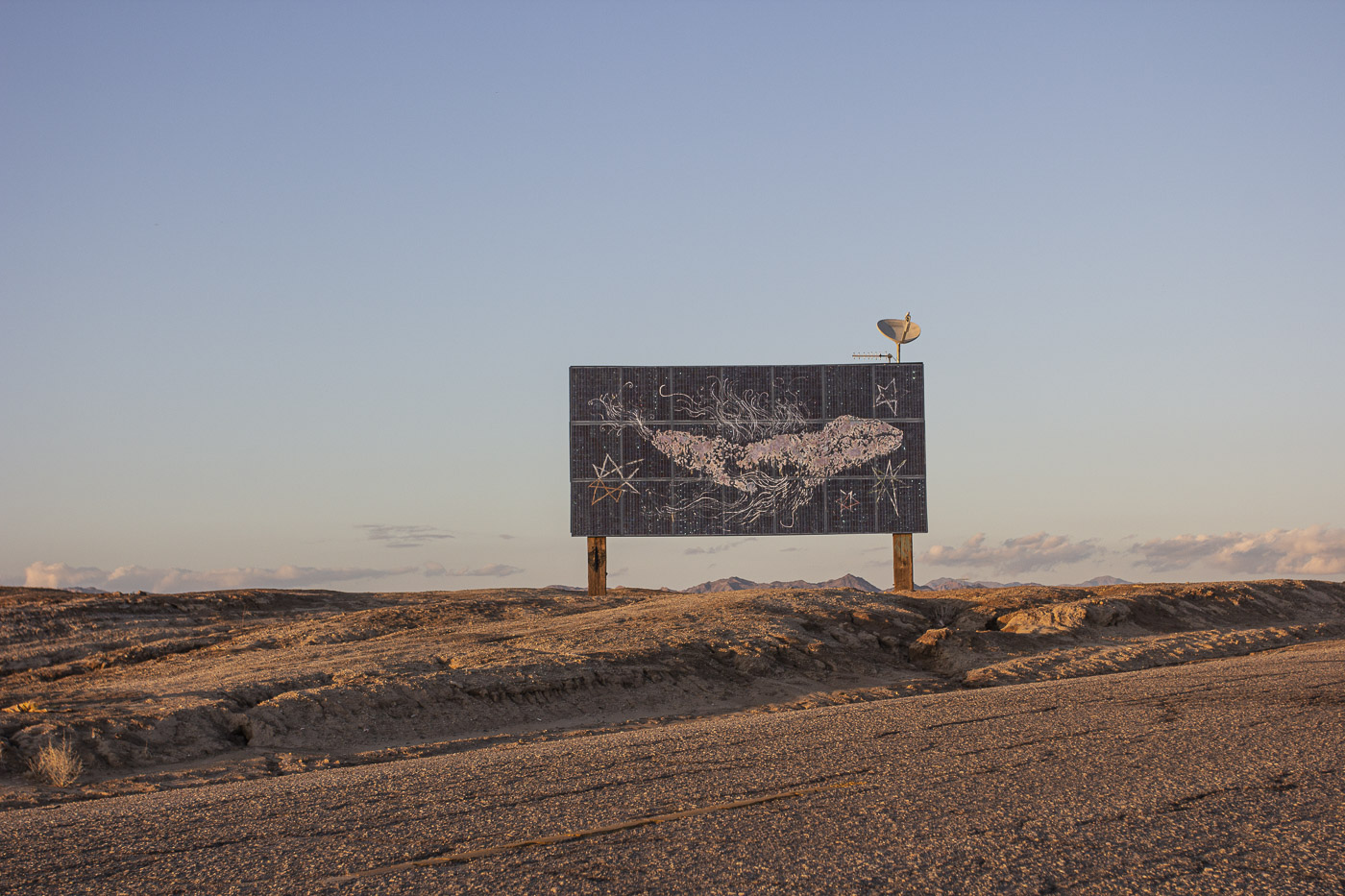 The first transmission of this whale song occurred on Christmas day. In all likelihood a slight shiver went past our atmosphere stirring the gasses found there, tickled a satellite, maybe a cavernous comet was filled with a new echo for a moment. But the goal of this project is to reach our much closer senses. If you have never heard a whale song, its not as pretty as the name implies. The sound is achy and dissonant, around the 7:50 minute mark of Guns N’ Roses’ Estranged you can hear a sample of whale songs if you are curious. 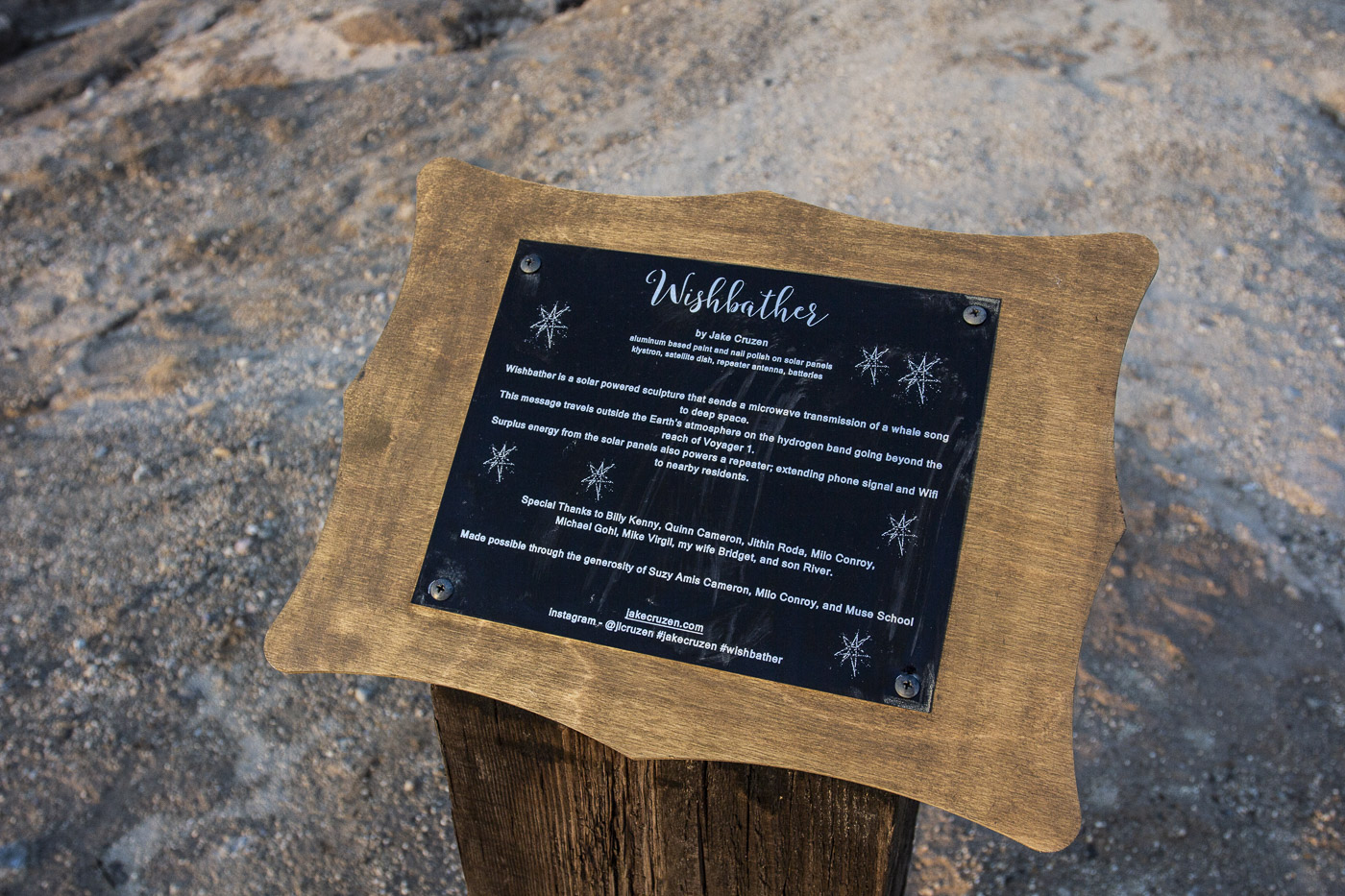 Wishbather has such depth as a project that a more considered understanding of its goals rewards an equal measure of freedom of interpretation. Rather a fixed narrative around the artwork once you have grasped the central tenants, Wishbather lets you float, its associative, its political but most importantly its a painting that keeps asking the questions that keep us interested in painting. All paintings have a core function, receive light, create color. It’s obvious to point out but Wishbather stores light. Sitting with that idea for a minute the obvious deepens into poetry. It’s a cradle of light. By working entirely in aluminum paint the image is glittered into being like the sun in water. Its a mirage that you can touch, and an image sometimes too blinding to fully see. 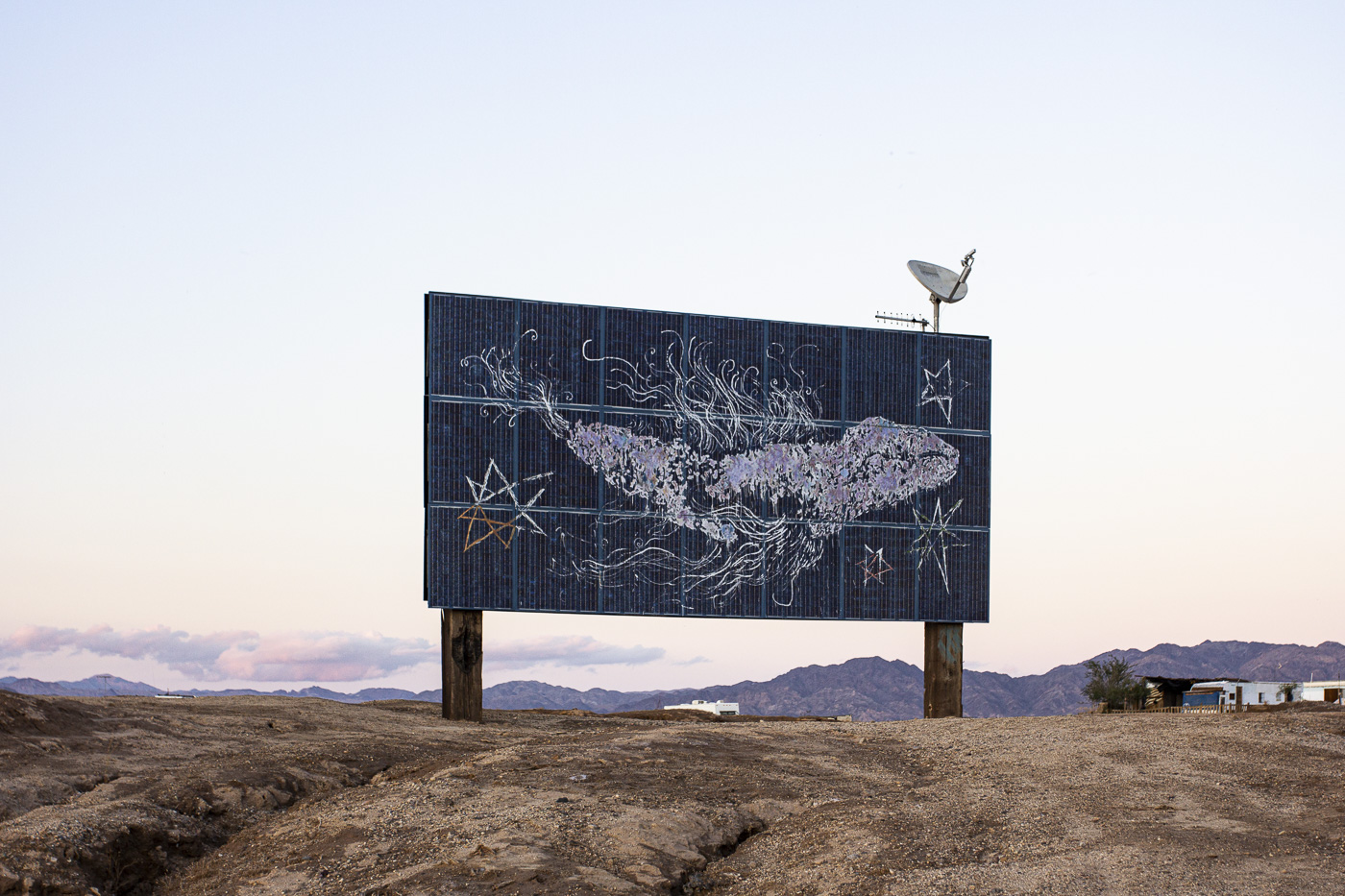 More than the lineage of public sculpture that Wishbather descends from, the primary form of artmaking here is painting. You can look to the tradition of sci-fi fantasy painting to infer Wishbather’s imagery and allegory. This genre has a penchant for paintings of wolves howling, dreamcatchers, mushroom people. A whale swimming through stars, wouldn’t be out of place on a Magic the Gathering card or above the counter at a headshop. The key to fantasy in general is in introducing the mystical or futuristic into the known and familiar. The genre is an embelshment of what is relatabe, a knight raises a sword against the dragon, you tell your boss at the resturaunt to fuck off. Treasure is a one year sober AA chip. A rainbow gleaming whale marooned in the desert works the same way. Imagination and wonderement are precious anomalies. Wishbather illustrates the certainty of finding these anomalies in unexpected places, or, less hopefully, the likelihood of your imagination and wonderment to be misplaced and starved of vitality, crying out.